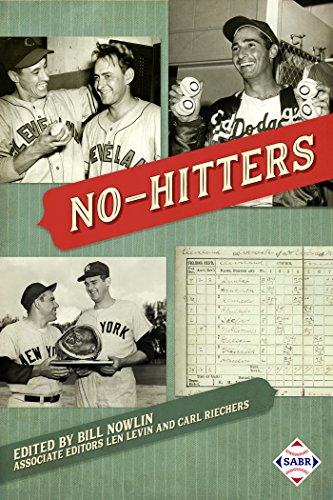 Pitching a no-hitter is a dream for every major-league pitcher. Fewer than half the pitchers in the National Baseball Hall of Fame have thrown a no-hitter. Many of the biggest names in pitching have never done it.

This book focuses on pitchers who threw no-hitters and the no-hitters they threw. Naturally, we couldn’t present biographies of everyone who ever threw a no-hitter nor could we present Games Project accounts of all of them. From around 300 no-hitters thrown in the majors (out of over 213,000 games), we have selected 59 no-hitters to include, along with the biographies of the men who threw them.

Touching on a variety of matters and spanning the decades from the earlier eras of baseball to more recent years, NO-HITTERS includes the first no-hitter in each league; first no-hitter thrown at 60 feet 6 inches; first in which the losing team scored a run; first pitcher to debut with a no-hitter; first extra-inning no-hitter; and many more. This book represents the collective work of 56 different SABR members as authors and editors.

and more articles we don't have room to list here!