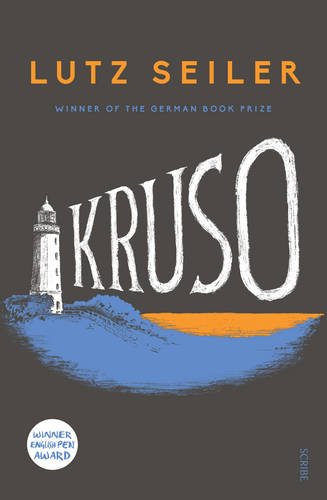 It is 1989, and a young literature student named Ed, fleeing unspeakable tragedy, travels to the Baltic island of Hiddensee. Long shrouded in myth, the island is a notorious destination for hippies, idealists, and those at odds with the East German state.

On the island, Ed stumbles upon the Klausner, Hiddensee’s most popular restaurant, and ends up washing dishes there, despite his lack of papers. Although he is keen to remain on the sidelines, Ed feels drawn towards the charismatic Kruso, unofficial leader of the seasonal workers.

Everyone dances to Kruso’s tune. He is on a mission ― but to what end, and at what cost? Ed finds himself drawn ever deeper into the island’s rituals, and ever more in need of Kruso’s acceptance and affection. As the wave of history washes over the German Democratic Republic, the friends’ grip on reality loosens and life on the island will never be the same.

'A multi-layered philosophical novel that poses a major question to us and to our time: How is freedom possible?' --Die Zeit

'Seiler's novel is lyrical and powerful in its eloquence. Already he is to be counted among the great contemporary German literary figures.' --Wdr 5


‘The German poet Lutz Seiler has brought all his art, linguistic ease, flair for dazzling images and master of what he describes as ‘the nervous systems of memory’ to this extraordinary debut novel … Kruso is an exciting, expansive work of German literature; it may well prove one of the major novels of the 21st century.’

‘This novel set in the historic summer of 1989 is a lighthouse, not an ivory tower.’

‘A special book that will endure.’

‘That rare treasure ― a great novel.’

‘A multi-layered philosophical novel that poses a major question to us and to our time: How is freedom possible?’

‘Lutz Seiler’s writings trace their roots to Uwe Johnson’s poetry and reflect the German past, present and future beyond the surface of “simple truths” [...] In Kruso, Lutz Seiler visualises the hopes and constraints of a whole country by means of one singular place, Hiddensee, during one short period of time, June to November 1989.’

(from the statement of the Uwe-Johnson-Prize 2014 jury)

‘Seiler delivers a debut novel with which he manages to catapult himself into the front rank of this country’s authors.’

‘A sublime book that is far more than just the novel of the year.’

‘This novel has historical-philosophical dimensions: it is a significant contemplation on different forms of freedom as well as a wonderfully poetic exaltation of a concrete historical event ― a truly great book.’

‘Seiler’s novel is lyrical and powerful in its eloquence. Already he is to be counted among the great contemporary German literary figures.’

‘A seamless English translation by Tess Lewis … Readers might doubt whether Robinson Crusoe can work in a German setting ― they might even feel affronted that it’s been attempted ― but Seiler’s novel springs from his own experience in a way that underlines the universality of the tale.’

‘An outstanding debut novel … Beautifully phrased and paced, Tess Lewis’s translation delights on every page as she conveys “the contagious sense of liberation” that blows through Mr Seiler’s mesmeric novel.’

‘An enigmatic Bildungsroman, adapting the literary trope of the island refuge to the dying days of East German socialism … English readers can delight in this prizewinning translation from Tess Lewis, which renders Seiler’s vision in prose of startling clarity.’

Lutz Seiler was born in 1963 in Gera, Thuringia, and today lives in Wilhelmshorst, near Berlin and Stockholm. Since 1997, he has been the literary director and custodian of the Peter Huchel Museum. His many prizes include the Ingeborg Bachmann Prize, the Bremen Prize for Literature, the Fontane Prize, the Uwe Johnson Prize 2014, and the German Book Prize 2014.

Tess Lewis is a writer and translator from French and German. Her translations include works by Peter Handke, Anselm Kiefer, and Philippe Jaccottet. She has won a number of awards including the 2015 ACFNY Translation Prize and a Guggenheim Fellowship. She is an Advisory Editor for The Hudson Review. www.tesslewis.org