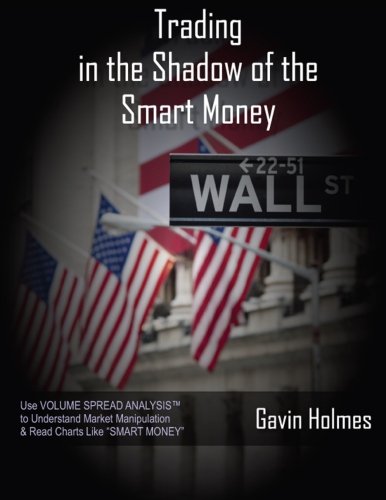 In “Trading in the Shadow of the Smart Money” Gavin discusses why market manipulation is actually a good thing for traders and investors who can read the chart correctly based on universal laws. All markets work because they are governed by three universal laws, which are the law of supply and demand, the law of cause and effect and the law of effort versus result. To make money in life there is a fourth and very important law, the law of attraction, and for the first time in any book on trading that we are aware of Gavin unlocks the key to success in trading and investing in the markets: BELIEF in your human ability to make money and in your system to read charts. The book gives actual trade set ups taught to Gavin by Tom Williams and gives over 50 annotated color charts explaining the VSA principles bar by bar.


In 2002 Gavin Holmes had the good fortune to meet Tom Williams, a former syndicate trader who traded with one of the largest stock trading funds in America during the late 1950’s and early 1960’s. Tom wrote two books that he self published, “The Undeclared Secrets that Drive the Stock Market” and “Master the Markets”. Both books have now sold or been distributed to over 100,000 traders and investors worldwide. Tom connected with Gavin, and at their first meeting Tom explained that the markets were being manipulated on a daily basis by the “Smart Money”. Tom was himself a “Smart Money” insider, and he had developed a trading system that could see the activity of the “Smart Money” as they were manipulating the markets by observing the interrelationship between volume, price action and the closing price on a price chart. Tom developed a methodology called Volume Spread Analysis and computerized his system with amazing results. Gavin became Tom’s protégé and over the last 9 years Gavin has become recognized as a worldwide expert in the Volume Spread Analysis methodology and market manipulation. Gavin has featured as a headline speaker at numerous seminars and webinars around the world, has provided educational courses for the CME Group in Chicago and has featured as the trader at the New York and Las Vegas traders expo’s Traders Challenge where Gavin traded his live account, showing the principles of VSA appearing live and taking trades. Gavin’s passion is based on the original teachings of Richard Wyckoff, Richard Ney and Tom Williams who all had the same goal, to educate the uninformed public.